Thessaly became part of the modern Greek state in 1881, after four and a half centuries of Ottoman rule. Since 1987 it has formed one of the country's 13 regions[1] and is further (since the Kallikratis reform of 2011) sub-divided into five regional units and 25 municipalities. The capital of the region is Larissa. Thessaly lies in northern Greece and borders the regions of Macedonia on the north, Epirus on the west, Central Greece on the south, and the Aegean Sea on the east. The Thessaly region also includes the Sporades islands.

In Homer's epic, the Odyssey, the hero Odysseus visited the kingdom of Aeolus, which was the old name for Thessaly.

The Plain of Thessaly, which lies between Mount Oeta/Othrys and Mount Olympus, was the site of the battle between the Titans and the Olympians.

According to legend, Jason and the Argonauts launched their search for the Golden Fleece from the Magnesia Peninsula. 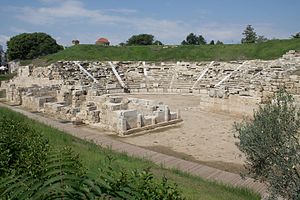 Template:Further Thessaly was home to extensive Neolithic and Chalcolithic cultures around 6000–2500 BC (see Cardium pottery, Dimini and Sesklo). Mycenaean settlements have also been discovered, for example at the sites of Iolcos, Dimini and Sesklo (near Volos). In Archaic and Classical times, the lowlands of Thessaly became the home of baronial families, such as the Aleuadae of Larissa or the Scopads of Crannon.

In the summer of 480 BC, the Persians invaded Thessaly. The Greek army that guarded the Vale of Tempe evacuated the road before the enemy arrived. Not much later, Thessaly surrendered to the Persians.[2] The Thessalian family of Aleuadae joined the Persians subsequently.

In the 4th century BC, after the Greco-Persian Wars had long ended, Jason of Pherae transformed the region into a significant military power, recalling the glory of Early Archaic times. Shortly after, Philip II of Macedon was appointed Archon of Thessaly, and Thessaly was thereafter associated with the Macedonian Kingdom for the next centuries.

Thessaly later became part of the Roman Empire as part of the province of Macedonia; when that was broken up, the name resurfaced in two of its late Roman successor provinces: Thessalia Prima and Thessalia Secunda. 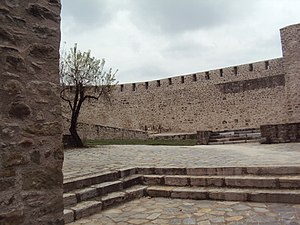 Part of the Byzantine castle of Trikala

View of the Panagia Olympiotissa Monastery in Elassona

Thessaly remained part of the East Roman "Byzantine" Empire after the collapse of Roman power in the west, and subsequently suffered many invasions, such as by the Slavic tribe of the Belegezites in the 7th century AD.[3] The Avars had arrived in Europe in the late 550s.[4]:29 They asserted their authority over many Slavs, who were divided into numerous petty tribes.{{#invoke:Footnotes|sfn}} Many Slavs were galvanized into an effective infantry force, by the Avars. In the 7th century the Avar-Slav alliance began to raid the Byzantine Empire, laying siege to Thessalonica and even the imperial capital Constantinople itself.

By the 8th century, Slavs had occupied most of the Balkans from Austria to the Peloponnese, and from the Adriatic to the Black seas, with the exception of the coastal areas and certain mountainous regions of the Greek peninsula.{{#invoke:Footnotes|sfn}} Relations between the Slavs and Greeks were probably peaceful apart from the (supposed) initial settlement and intermittent uprisings.{{#invoke:Footnotes|sfn}} Being agriculturalists, the Slavs probably traded with the Greeks inside towns.{{#invoke:Footnotes|sfn}} It is likely that the re-Hellenization had already begun by way of this contact. This process would be completed by a newly reinvigorated Byzantine Empire.

With the abatement of Arab-Byzantine Wars, the Byzantine Empire began to consolidate its power in those areas of mainland Greece occupied by Proto-Slavic tribes. Following the campaigns of the Byzantine general Staurakios in 782–783, the Byzantine Empire recovered Thessaly, taking many Slavs as prisoners.{{#invoke:Footnotes|sfn}} Apart from military expeditions against Slavs, the re-Hellenization process begun under Nicephorus I involved (often forcible) transfer of peoples.{{#invoke:Footnotes|sfn}}

Coat of arms of the Duchy of Neopatras.

In 977 Byzantine Thessaly was raided by the Bulgarian Empire. In 1066 dissatisfaction with the taxation policy led the Aromanian and Bulgarian population of Thessaly to revolt against the Byzantine Empire under the leadership of a local lord, Nikoulitzas Delphinas. The revolt, which began in Larissa, soon expanded to Trikala and later northwards to the Byzantine-Bulgarian border.{{#invoke:Footnotes|sfn}} In 1199–1201 another unsuccessful revolt was led by Manuel Kamytzes, son-in-law of Byzantine emperor Alexios III Angelos, with the support of Dobromir Chrysos, the autonomous ruler of Prosek. Kamytzes managed to establish a short-lived principality in northern Thessaly, before he was overcome by an imperial expedition.{{#invoke:Footnotes|sfn}}

"The Hyperian Fountain at Pherae", during the Ottoman era, by Edward Dodwell.

One of the flags used in Thessaly during the Greek War of Independence (designed by Anthimos Gazis).

From 1271 to 1318 Thessaly was an independent despotate that extended to Acarnania and Aetolia, run by John I Doukas. In 1309 the Almogavars or Catalan Company of the East (Societas Catalanorum Magna), settled in Thessaly. In 1310, after lifting the siege of Thessalonica, the Almogavars withdrew as mercenaries in the pay of the sebastokrator John II Doukas and took over the country. From there they departed to the Duchy of Athens, called by the duke Walter I. In 1318, with the extinction of the Angelid dynasty, the Almogavars occupied Siderokastron and southern Thessaly (1319) and formed the Duchy of Neopatria.

In 1348, Thessaly was invaded and occupied by the Serbs under Preljub. After the latter's death in 1356, the region was conquered by Nikephoros Orsini, and after his death three years later, it was taken over by the self-proclaimed Serbian emperor Simeon Uroš. Simeon's son John Uroš succeeded in 1370 but abdicated in 1373, and Thessaly was administered by the Greek Angeloi-Philanthropenoi clan until the Ottoman conquest c. 1393.

Ottoman control was disputed by the Byzantines until the 1420s when it was consolidated by Turahan Bey, who settled Turkomans in the province and founded the town of Tyrnavos. The territory was ruled through the Sanjak of Tirhala administrative division during the Ottoman period. 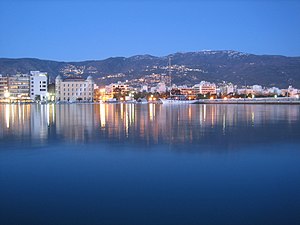 The port of Volos

In 1600, a short-lived rebellion broke out in the region.

Rigas Feraios, the important Greek intellectual and forerunner of the Greek War of Independence was from the region. He was born in Velestino,[5] near the ancient town of Pherae.

In 1821, parts of Thessaly and Magnesia participated in the initial uprisings in the Greek War of Independence, but these revolts were swiftly crushed. Thessaly became part of the modern Greek state in 1881, after the Convention of Constantinople except the area around the town of Elassona, which remained in Ottoman hands until 1912. It was briefly captured by Ottomans during the Greco-Turkish War of 1897. After the Treaty of Constantinople (1897), Greece was forced to cede minor border areas and to pay heavy reparations. The remaining part of Thessaly held by the Ottomans was finally regained by the Greeks during the First Balkan War in 1912.

During World War II, Thessaly was occupied by the Kingdom of Italy from April 1941 to September of 1943. After the Armistice of Cassibile, Germany occupied Thessaly until October 1944.

The Aeolic dialect of Greek was spoken in Thessaly. This included several local varieties, in particular the variants of Pelasgiotis and Thessaliotis. The language was not written.[6] 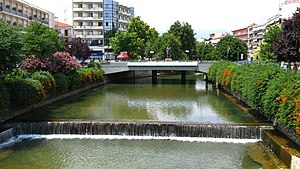 Litheos river flowing through the city of Trikala

Thessaly occupies the east side of the Pindus watershed, extending south from Macedonia to the Aegean Sea. The northern tier of Thessaly is defined by a generally southwest-northeast spur of the Pindus range that includes Mount Olympus, close to the Macedonian border. Within that broken spur of mountains are several basins and river valleys.

The easternmost extremity of the spur extends southeastward from Mount Olympus along the Aegean coast, terminating in the Magnesia Peninsula that envelops the Pagasetic Gulf (also called the Gulf of Volos), and forms an inlet of the Aegean Sea. Thessaly's major river, the Pineios, flows eastward from the central Pindus Range just south of the spur, emptying into the Thermaic Gulf.

The Trikala and Larissa lowlands form a central plain which is surrounded by a ring of mountains. It has distinct summer and winter seasons, with summer rains augmenting the fertility of the plains. This has led to Thessaly occasionally being called the "breadbasket of Greece".

The region is well delineated by topographical boundaries. The Chasia and Kamvounia mountains lie to the north, the Mount Olympus massif to the northeast. To the west lies the Pindus mountain range, to the southeast the coastal mountains of Óssa and Pelion.

Several tributaries of the Pineios flow through the region.

Most of the province has a hot summer Mediterranean climate (Köppen: Csa), but also found is a cold semi-arid climate (BSk) including the capital Larissa (on its Mediterranean edge of category). Even in the north of Thessaly a rare humid subtropical climate (Cfa) can be found, although it is different from a climate typically below or above the tropics, it also marks the limit of this rare Cf subtype on the European continent (e. g. the small village of Kalvia).[7]

A 2.8% decrease in the population since 2001 was noted, but Thessaly remains the third largest region in the country in terms of population.

The metropolitan area of Larissa, the capital of Thessaly, is home to more than 230,000 people, making it the biggest city of the region.

The alluvial soils of the Pineios Basin and its tributaries make Thessaly a vital agricultural area, particularly for the production of grain, cattle, and sheep. Modernization of agricultural practices in the mid-20th century has controlled the chronic flooding that had restricted agricultural expansion and diversification in the low-lying plains. Thessaly is the leading cattle-raising area of Greece, and Vlach shepherds move large flocks of sheep and goats seasonally between higher and lower elevations.

In the last few decades, there has been a rise in the cultivation of dried nuts such as almonds, pistachios, and walnuts, especially in the region of Almyros. An increase in the number of olive oil trees has been also observed. The nearly landlocked Gulf of Pagasai provides a natural harbor at Volos for shipping agricultural products from the plains and chromium from the mountains.

There are a number of highways such as E75, and the main railway from Athens to Thessaloniki (Salonika) crosses Thessaly. The region is directly linked to the rest of Europe through International Airport of Central Greece, which is located in Nea Anchialos, a small distance from Volos and Larisa. Charter flights link the region and bring tourists to the wider area, mainly in Pelion and Meteora. The new infrastructure includes a brand new terminal ready to serve 1500 passengers per hour and new airplanes.

Although the historical region of Thessaly extended south into Phthiotis and at times north into West Macedonia, today the term 'Thessaly' is identified with the modern Administrative Region which was established in the 1987 administrative reform. With the 2010 Kallikratis plan, the powers and authority of the region were redefined and extended.

The region's governor is Konstantinos Agorastos [Template:Separated entries] (New Democracy), who was elected in the 2010 local elections and re-elected in 2014 and 2019.